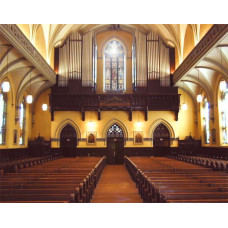 We revisited the E.M. Skinner organ at the end of 2006 to create a completely new version of the organ with all new samples. These samples are taken from inside the pipe chambers with microphones moving closely from pipe to pipe. Sample recordings were originally done in stereo at 24 bit 96KHz direct to disk with the highest quality microphones and preamplifiers. The final sample resolution was converted to 24 bit 48KHz. All pipe samples are recorded dry with no acoustics.

New features in the MasterWorks Series include the following:
- Completely dry/close pipe samples taken from within the pipe chambers
- Chromatic sampling at 24 bit 96KHz (converted to 48KHz for final release)
- Long stereo samples with up to 8 loops per note
- New dual screen displays for left and right stop jambs making an ideal use for touch screens
- More realistic tremulants
- MIDI output couplers added for each division
- Bass Couplers added for each manual
- Less memory and polyphony required than the wet version
- Pristine sound with absolutely minimal noise reduction
- No need for multiple releases due to closely recorded samples

Please note that dry pipe samples benefit greatly from a multiple output audio system. The website demonstrations for the MasterWorks Series used 26 channels of audio recorded live with microphones during playback of the organ in Hauptwerk.

We are still offering the original version of this virtual instrument for Hauptwerk 2.21 and higher. Originally sampled in 2004 the 'wet' Skinner contains the natural church acoustics with each sample. Microphones were placed out in the church to capture the organ as heard in the room.

The Mt. Carmel organ has a wealth of reed stops offering organists a palette of colors to choose from in the brass section alone. The Tuba Mirabilis is another highly acclaimed Skinner stop and sounds on high wind pressure distinctly standing out from the other registers of the organ. In early 2004 a new Trompette en Chamade was added to the organ after considerable donations from the church parish and we have included this as part of the sample set. The installation was headed by the Illinois based organ building company Fabry Pipe Organs.

A wide variety of organ literature may be performed on Skinner organs. French Romantic music sounds especially appropriate as well as performances of orchestral transcriptions. Baroque music is also very well suited for the instrument in both organ solo literature and concerto transcriptions.