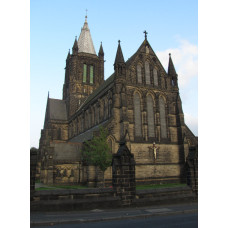 Today, Armley is a modest suburb of the Yorkshire city of Leeds. Although there was evidence of a settlement here recorded in the Domesday Book of the 11th century, it was the period of the industrial revolution in the late 18th century which saw the rise of Armley as an area of real importance in the textile industry. The woollen mills at Armley were expanded over time and became the largest in the world by 1788, with no fewer than five large waterwheels powering the machinery. Such industry brought employment and prosperity and in 1804 the mills were purchased by Benjamin Gott, a man whose family were to have a huge influence over the building of ecclesiastical buildings in and around the immediate area. Initially, this involved the expansion of an old, relatively small chapel in Armley; however, after Benjamin’s death the Gott family provided the money for Christ Church, a magnificent new place of worship in the breakaway parish of Upper Armley. By comparison, the Armley Chapel looked distinctly ordinary, so a collection of other wealthy businessmen set about a solution which resulted in the perpendicular gothic church of St Bartholomew we see today. Occupying a footprint of 57 by 18 metres and with a spire as tall as the building is long, the church is three times the size of the chapel it replaced and significantly larger than the neighbouring Christ Church.