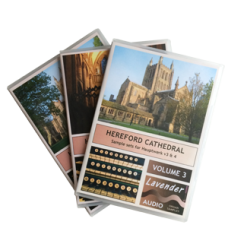 The city of Hereford is situated in the west midlands of England, fairly close to the border with Wales and is the county town of Herefordshire. The region is relatively sparsely populated (by UK standards) and the county is predominantly known for its agricultural produce with many fruit orchards keeping the local cider makers in business. The Hereford breed of cattle is probably the county’s most famous export and today Herefords are found in the US, South America and Australia.

The Cathedral itself dates from the 11th century and is dedicated to two saints, Saint Mary the Virgin and Saint Ethelbert the King - the latter having been beheaded nearby in the year 792. The chief treasure at the Cathedral (aside from the Father Willis organ of course !) is the celebrated Hereford Mappa Mundi, which is a mediaeval map of the world dating from 1300. Of the 1100 or so Mappae Mundi still in existence, the Hereford map is the largest example remaining in the world today. The Cathedral also possess a copy of the Magna Carta which dates from 1217 - this document is one of the forerunners of modern day British constitutional law.

In common with more or less every Cathedral in England, music plays a hugely important role in Cathedral life. During term time, the Cathedral choir sings at three services each Sunday and there is a Choral Evensong every day except Wednesday. The organ plays a key role in this and is therefore first and foremost a liturgical instrument with duties ranging from delicately colouring Anglican chant to leading a full Cathedral. However, regular organ recitals and recordings also take place and many distinguished recitalists have performed at Hereford.

For further details of the Cathedral and its history, please visit the Cathedral’s excellent website, which also contains some impressive 360 degree virtual tours.

• Samples are presented “wet”, ie complete with the natural reverberation of the church (for some stops, 5 seconds or more)

• Multiple releases are employed, with the vast majority of stops featuring three releases per note for greatly improved realism in staccato passages

• Multiple loops are featured, with almost all samples benefiting from 3 or 4 separate loops

• Hauptwerk’s models for swell enclosure and tremulant have been accurately programmed, based on samples taken across the compass of each stop

In planning for the release of the three volumes, care has been taken to create organs that are complete in their own right and bear comparison to other instruments of a similar number of stops. Each volume is of a similar size and the pricing tends to reflect this.

All three volumes are now available, along with an Evaluation Mini Set. An “XL” version is due later in 2012 which will increase the manual and pedal range to 61 and 32 notes respectively, as well as offering various other minor enhancements and changes. This will be offered as a free download to customers of all three volumes.

These sample sets are all compatible with Hauptwerk version 3 upwards. The organ was sampled in April 2009 and February 2010 using high quality microphones by Bruel & Kjaer (now DPA) and AKG. Mic pre-amps and digital conversion by Focusrite and M-Audio.