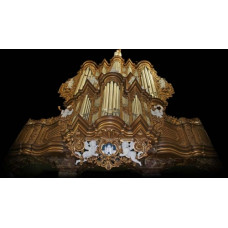 Little is known about the oldest organ of the Bovenkerk. It is generally accepted that a large organ built by Johan van Kovelens (or J. van Covelen) was placed in the Bovenkerk between the years 1520-1523. The oldest pipe work of this organ (especially the flutes 4’ and 2’ of the upperwork) most likely originates from Jan Morlet (1629).

In 1676 Johan Slegel completed a new instrument for which he utilized material from the old organ. In the years 1694-1712 Johan Duyschot made some alterations to the organ and also took care of its maintenance.

Albertus Anthoni Hinsz performed some elaborate work on the organ in the years 1741-1743. He designed a new case, renewed all the reservoirs, wind chests as well as the action. At the same time a number of stops were added to the organ making it the largest organ built by Hinsz.

During the years 1788-1790 H.H. Freytag and F.C. Schnitger Jr. added an eight rank independent pedal as well as a Borstwerk of four voices which was playable from the Bovenwerk manual. The Dulciana from the Rugwerk was transferred to this new Borstwerk. In the new available space they placed a Fagot 16’ on the Rugwerk.

During the nineteenth century the organ builders Van Gruisen, Scheuer and Naber did some work on the instrument. In 1866 the organ builder Zwier van Dijk from Kampen added a separate manual for the Borstwerk. He also added some more stops to it. The major restoration (1967-1975) was carried out by the organ builder Bakker & Timmenga from Leeuwarden. The most important question was, which specification to use as a starting point, the one from 1790 or the one from 1866. They finally opted for a solution which made it possible to maintain eight stops from the period 1820-1866.

In 2000 the whole instrument was “revitalised” by the organ builder Reil. The whole organ was cleaned and checked for proper speech. They also connected the seven “keilbalgen” wedge bellows to the wind machine.

Apart from that the mechanical action was carefully adjusted and repaired where necessary. This whole project was carried out in cooperation with the consultant, Mr. Rudi van Straten.